The main character is Son Goku, he is very strong in spite of the fact that he is a kid. That is because he is not from earth, but from the planet Vegeta! And Since he’s from a different planet, he is not human but a Saiyan. Saiyans are aggressive warriors, that turns into a great ape when he sees the moon. He starts the adventure due to a dragon ball that he kept as memory of his grandpa.And one day he stumbles across a girl named Bulma. She recognizes the dragon ball, and she is looking for the other 6! So they head off on a journey!In my opinion, when it comes to talking about his personality, people would say he is empty minded; but I think about his mentality: ”No problem, we can resuscitate the dead with the Dragon ball”, reflects his rationality. This idea is the secret which leads to the reason why he can purely seek strength, I think. 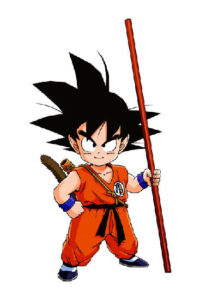 His name is Goku, his special move is Kamehameha. This word is part of English like tsunami. He was able to defeat many enemies using this at Karate competiton.He is a Saiyan raised on Earth and the overall main protagonist of the Dragon Ball series. Kakarot originally was sent to destroy Earth as an infant, there he would be adopted by Grandpa Gohan who named him Son Goku. A head injury at an early age alters Goku's memory, ridding him of his initial destructive nature and allowing him to grow up to become one of Earth's greatest defenders. He constantly strives and trains to be the greatest warrior possible, which has kept the Earth and the universe safe from destruction many times. 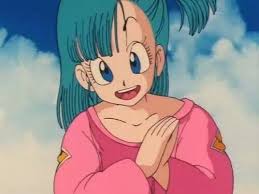 She is a brilliant scientist and the second daughter of Capsule Corporation's founder Dr. Brief and his wife Bikini, the younger sister of Tights, and is Goku's first friend. She used to be the girlfriend of Yamcha,but moved on (while remaining friends with him) and, eventually, became the wife of Vegeta, as well as the mother of Trunks and Bulla. A technological and scientific genius who can turn her talents to almost any field and understand alien technology near-effortlessly, her inventions, and the resources of Capsule Corporation, have been invaluable to Goku and the rest of the Dragon Team many times. Her most notable invention is the Dragon Radar. 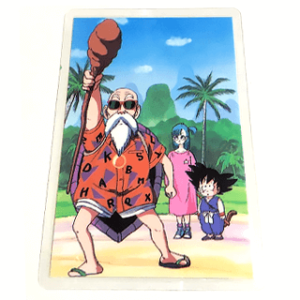 Master Roshi is bald, with a thick white fu manchu mustache and beard. He is almost always seen wearing his trademark sunglasses; some time later Master Roshi left his old sunglasses and began to wear more futuristic ones. He wears beach clothes or a martial arts suit and a Turtle Shell on his back. He usually wields a walking stick. His bust, waist and hip measurement are all 73cm.He is very womanizer. He taught Goku skills of competition for the tournament. 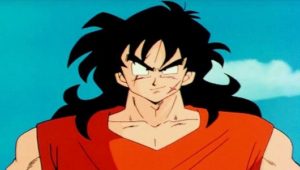 A former desert bandit, Yamcha was once an enemy of Goku, but quickly reformed and became a friend and ally. Brave, boastful and dependable, Yamcha is a very talented martial artist and one of the most powerful humans on Earth, possessing skills and traits that allow him to fight alongside his fellow Z Fighters when major threats loom. Although he retired by the latter half of Dragon Ball Z, due to being largely outclassed by both his allies (namely the Saiyans) and their enemies, he is always present whenever a new threat approaches, and will occasionally lend a helping hand, thus proving himself to be a powerful ally in his own right.

The setting is Dragon World, whose cities give off the impression of being a near-futuristic version of Earth. The story is an adventure to collect the 7 Dragon Balls, which can grant wishes when gathered together. Aside from Goku, evil organizations bent on world conquest also have their sights on collecting the Dragon Balls, and thus Goku must compete with them during his search. In the midst of it all, Goku makes many friends along the way, and engages in many magnificent battles with formidable enemies on a universal scale.

We can discuss Dragon Ball online. Ask me for any questions.