Many Japanese workers get about a week off around the end of April and beginning of may. This is because there is cluster of national holidays during this time.

The “week” starts on April 29, a national holiday that used to be celebrated as the birthday of Emperor Showa, who passed away in 1989, It is now celebrated as Showa day, a day to allow people to think back on the hardship and recovery of the Showa period to ponder the future of Japan.

May 3 is Constitution Memoria Day, The present Constitution of Japan came into effect on this day in 1947.May 5 is Children’s day, set aside t pray for the health growth and happiness of boys and girls. Because May 4 falls between two holidays, this day, too, was designated a national

holiday. Some companies give employees a day off on May 1, which is May Day.

The word “Golden Week” was the first used by movie companies to get people to take advantage of the “golden opportunity to go see a film. The term gradually began being used by other people to refer to this string of holidays.

Many big factories close down for a week or even 10 days because it’s inefficient to keep shutting them down and starting them back up when holidays and weekends are clustered together. Although offices tend to be open on days that are not holidays, many workers use their paid vacations to take an extended break from the daily routine.

Golden Week comes at a very pleasant time of the year in Japan, temperatures are neither too cold nor too hot. Many people thus travel to resort areas. In recent years, increasing numbers have been traveling to foreign destinations with their families. 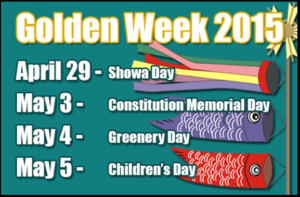 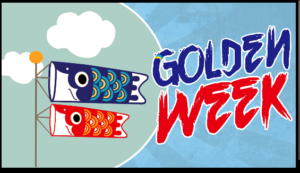