The new railroad is under construction in Osaka

The planned extension section of the Osaka Monorail Main Line is 9.0km from Kadoma City to Uryudo. On the way, we will set up additional 4 stations: Kadoma-Minami, Konoikeshinden, Aramoto and Uryudo. The one station will be set up adjacent to the Higashi-Osaka City Hall. A garage will be set up on the unused land on the Route2 to the north of Uryudo, the final stop.

This is important and secret new for real estate investors. So many universities are located in Higashi Osaka city. Kintetsu Nara line is served even to Kobe. Kadoma city is known for the head quarter of Panasonic. It means so many subcontractors are everywhere in these areas.

Both cities will be connected to Osaka airport.

Osaka is definitely growing. If you want to start the real estate investment please let me know. 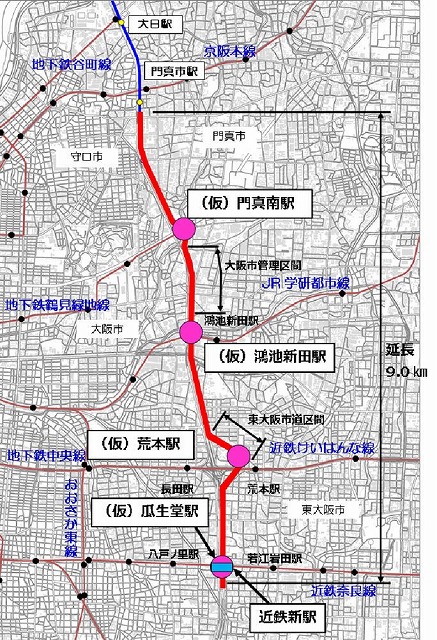 I am sorry I only have the Japanese version of the map. The only new station is Uryudo but it will be connect to Osaka air port.
Itami air port is overshadowed by KIX but still plays an important role. Even though the airport is served only for domestic but you can fly to anywhere in Japan. The airport company make a huge profit.
Like I mentioned earlier, there are a lot of subcontractors of Panasonic and big manufacturers in the map above.